In a constantly changing world, we often wonder what should our next step be. It’s unsettling, especially for us working in the tech industry, because we don’t want to be left behind, and we’re always trying to be ahead of the curve when it comes to the next great change. Sometimes it seems impossible.

But what if I told you the industry is going through a massive transformation that’s fusing the real world with the digital one?

Welcome to the Augmented Reality world

We all have some idea of what augmented reality is, maybe influenced by what we’ve seen in movies or series. We’ve imagined a future where physical and digital reality are merged, from calls via hologram to visiting other worlds. Even though all this may sound like science fiction, it’s part of our everyday lives nowadays. Instagram filters are a great example. AR is mainly used in leisure and entertainment, but we can’t undermine its importance in the education, work, and medicine industries. To better understand its essential milestones and how they affected human life, we must take a little trip down history lane. (Source: Škoda Media Services)

The history of Augmented Reality (AR) 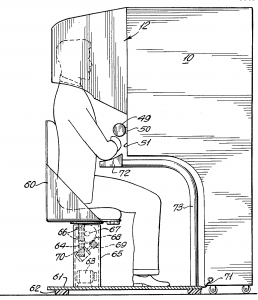 Augmented reality was created for the first time by a photography director called Morton Heilig in 1957. He invented the “sensorgram,” which could deliver images, sounds, vibrations, and smells to the spectator. Of course, it wasn’t controlled by a computer, but it was the first attempt at adding additional information to a live experience.

The definition of Augmented Reality (AR) is the technology that combines data from the real world and virtual interactive elements programmed to operate in that physical environment.

There were many advances in the AR world. These are some worth mentioning:

Now, to qualify as augmented reality, technology must:

In some way, we could say augmented reality is a “better” version of the real world that responds dynamically to its changes. It’s different from virtual reality (VR), isolating its users and showing them an utterly simulated reality made almost entirely of fabricated elements. However, both AR and VR have in common a live contextual response to users’ actions and interactions with their surroundings.

Thanks to smartphones, technology is available to everyone, and users are used to changes relating to hardware, color, and user interface size. In a similar way that two dimension screens did way back, this sort of tech revolutionized the world with its appliances across many industries, but with much higher risks because it mixes the real and digital world. (Source: Microsoft)

These facts raise the question: ¿How can AR help the User Experience?

Let’s think of an airplane engineer that has to conduct an inspection and verify how long ago a specific piece has been placed there. With a traditional screen-based UI, the mechanic would have to save the piece number somehow and then get access to a phone, tablet, or computer to determine when that piece was placed and functioning. With AR techs such as HoloLens or Google Glass, the piece registry could be shown right on top, with few or no commands.  The mechanic can remain there and offer relevant information without moving or searching for data elsewhere. The lack of needed controls makes it easier and more efficient and requires lower user effort. (Source: Microsoft)

From this example, some aspects stand out about AR:

We’re growing increasingly connected to technology, to the point where we’re losing independence to a glass screen, limiting our relationship with other people and our surroundings. In this context, augmented reality steps in as an open door to liberation,  where we can make the most of what technology offers without necessarily disconnecting from the real world. Today, for example, we can use glasses like the Spectacles from Snapchat, which allows us to break the mold from the tech world and make augmented reality an accessible possibility for all; they’re an everyday accessory. (Source: Snapchat)

Regarding companies, they can have teams working from anywhere in the world and see each other in the same physical space through avatars.

On the other hand, even though technology keeps us connected, we must never lose sight of the fact that we are sensible and emotional beings, so the role of the UI designer must have an impact beyond what’s functional, where the user can be a collaborator. It’s not just using a product but part of it. To achieve this, we must focus on user participation from the get-go, all through the investigation, creation, and validation, up until its implementation.

So, the next time you think about augmented reality, consider that, as digital products and services creators, we have the vital task of making this world a better place, where augmented reality is an addition to it without completely replacing it. This way, somehow, we will be augmenting our reality.